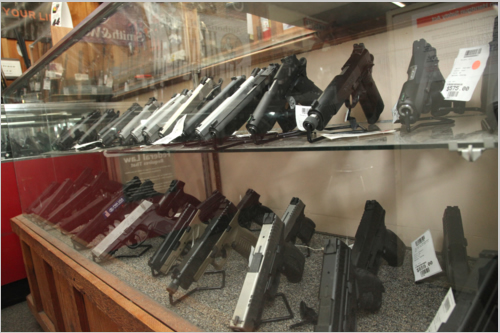 How do you know which gun to choose when you are looking into Albuquerque home & personal firearms defense? Many would-be first-time gun owners are anxious to purchase a home-defense gun before more stringent gun laws are passed. Most people looking to purchase their first firearm have a long list of questions. Handgun or long gun? Pistol or revolver? Shotgun or rifle? What about caliber and ammunition type? Finally, how can the gun be stored so it is both ready for home defense, and inaccessible to curious children and criminals?

Of course, when faced with a lethal threat, any gun is better than no gun. But what is the best gun for personal defense? Home defense? Unfortunately, there is no firearm that is perfectly suited for every person or circumstance. Rather than purchasing a gun based solely on the recommendation of a friend, family member, gun shop owner or because it was featured in a magazine or talk show, you should consider the capabilities of those who will potentially use the gun to thwart a home invasion.

Here’s an overview of various gun types as they relate to home & personal defense:

The overwhelming majority of pistols are semi-automatic, which means after they are fired, a new round is automatically chambered from the magazine. This cycle is repeated with each trigger pull until all of the ammunition is depleted. While there are many pistol designs on the market, most pistols are easier to shoot than revolvers, thanks in large part to a lighter trigger pull. The lighter the trigger pull, the less likely the gun will move off-target as the pistol is fired.

Although pistols tend to be easier to shoot accurately, they are more complicated to operate than revolvers. To clear a malfunction or reload under stress takes considerable practice. In addition, many pistols have external safety mechanisms that must be disengaged in order to fire the pistol. This too can be an obstacle for an inexperienced shooter or one operating under the stress of a life and death encounter.

For home defense, a full-size pistol is an excellent choice, assuming those who may need to shoot it can comfortably grip the pistol for maximum control. To determine whether your hand is big enough for a particular pistol, grip it so that the slide is aligned with the middle of your forearm. While holding the gun in this manner, ensure that you can comfortably reach the trigger without changing your grip. You should also make sure that other controls—such as the magazine release, slide release and external safety (if applicable)—are within reach while you maintain a shooting grip on the pistol.

While some may dismiss revolvers as outdated relics, they are viable home-defense handguns. Detractors will point out that revolvers tend to have a lower ammunition capacity than pistols, which means you’ll have fewer shots before you’ll need to reload. Reloading a revolver is also more difficult—particularly under stress—than a semi-automatic pistol because it has multiple chambers. However, when it comes to reliability, nothing beats a revolver.

Since revolvers are comprised of fewer parts, there’s less chance of the gun malfunctioning. Revolvers are also easier to operate, allowing for virtual point-and-shoot functionality. In the rare case of a malfunction, the shooter need only pull the trigger again. This act rotates the cylinder so that a new round aligns with the barrel. 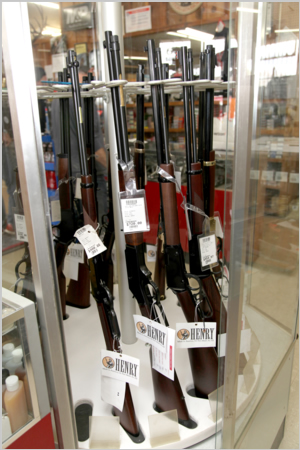 The shotgun may be your option. Shotguns are certainly effective; however, there are some drawbacks to using a shotgun inside the home.

The shotgun’s extended sight radius—along with the fact that it enables you to have both hands on the weapon while achieving a cheek weld and shoulder mount—makes it easier to aim than a handgun. While hunting fowl with a shotgun, the shotgun should be “pointed” rather than aimed. However, when you are confronting a criminal inside your residence, you need to aim. It is possible to miss with a shotgun.

Since the shotgun is designed to be operated with two hands, opening doors, turning on lights and other seemingly routine tasks associated with searching your home for a bad guy can be a bit of a challenge. Another concern is the shotgun’s barrel length, which can make it difficult to maneuver around corners without telegraphing your intent.

If you load your shotgun with 00 buckshot, it may be difficult to ensure that all eight or nine pellets (depending on the brand) hit your intended target. While it may not take all of the pellets to incapacitate your adversary, stray pellets could injure or kill the very people you intend to protect.

Rifled slugs can be very accurate, but there are tremendous over-penetration issues associated with these projectiles. With slugs you need to worry about your neighbors as well as the occupants of your own home.

The use of birdshot in a home defense shotgun is somewhat controversial. While over-penetration is certainly mitigated, many speculate as to whether birdshot would incapacitate a determined assailant.

There’s no doubt that a rifle is easier to shoot accurately that handgun. An AR-15 can afford you increased ballistic performance and higher ammunition capacity than most other firearms. However, they share many of the limitations of a shotgun when it comes to clearing your residence in search of an intruder. Rifles and other shoulder-fired weapons also tend to be less accessible than handguns during a home defense situation.

In theory, the larger the bullet you hit the bad guy with, the better. After all, a bigger bullet will tend to produce a more significant wound, which is more likely to stop an attacker. However, a hit with a 9mm bullet beats a miss with a .45-caliber bullet any day of the week.

When you consider most gunshot wounds are survivable regardless of caliber, the importance of shot placement is clear. While being shot with any type of firearm is likely to have an effect on your adversary, shots to the thoracic cavity and cranial vault are most likely to quickly incapacitate the attacker, thus stopping the threat.

Many consider .45-caliber to be the only handgun round suited for personal combat. However, for a shooter with smaller hands, the enhanced control from a 9mm pistol’s slimmer grip and softer recoil may more than make up for its lesser ballistic capability compared to the .45. Also, today’s technologically advanced hollow-point bullets make even smaller caliber bullets capable of stopping a deadly threat.

You may be tempted to purchase less expensive full metal jacket or “ball” ammunition for your home-defense gun. While ball ammo is fine for training, it can be very problematic in a home-defense situation. Ball ammunition is likely to pass through a bad guy, which not only minimizes the effect of the bullet but also increases the likelihood of the bullet striking an unintended target, such as a family member. In fact, it’s not uncommon for ball ammunition fired from a handgun to penetrate multiple interior residential walls.

For home defense, hollow-point ammunition is the only way to go. Hollow-point bullets are designed for optimal expansion upon impact. This creates a larger wound and produces a “parachute” effect, which helps contain the bullet.