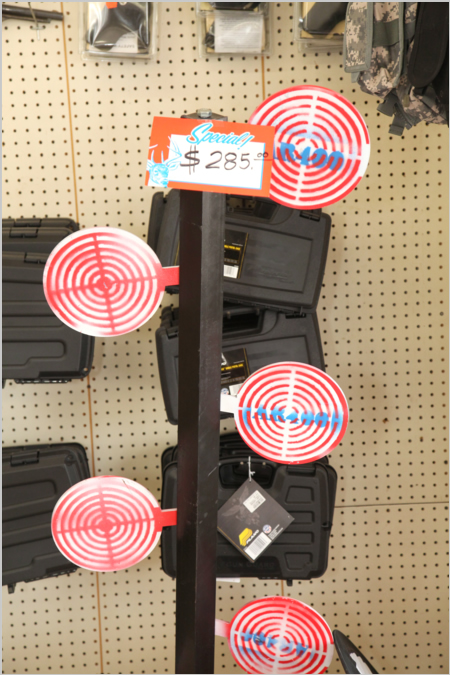 There are many locations that offer Albuquerque target practice and shooting. However, before you enter any of these locations we would like to offer you some insight on firing a gun, shooting stance, and sight alignment

“Pulling the trigger” is the action performed to discharge a firearm. While it sounds simple, it also provides challenges for many shooters.

Here are the basics of firing any shot with a rifle or pistol:

Once you have created enough pressure on the trigger, it will move (sometimes imperceptibly) until the striker, firing pin or hammer in the gun is activated and starts the ignition process, firing the gun.

Several things happen in the gun to cause it to fire. The part you control is pulling the trigger. If done correctly, nothing moves, not your hands or the sight picture and the pistol fires a round exactly where you intended.

However, if you “jerk” or “flinch” before or at the instant you fire the gun, the shot will most probably head somewhere other than where intended.

A good trigger pull is one of, if not the most important aspect of shooting well. Serious shooters work to perfect their trigger pull. New shooters have a tendency to pull the trigger in an abrupt manner that can move the gun quickly out of alignment and cause the shot to miss.

The old adage of “aim and squeeze the trigger slowly” is a perfect place to start for the new shooter.

If you are looking for Albuquerque target practice and shooting, consider these tips as well:

To a great degree, your physical condition and surroundings control how you stand. However, there are a few key points you should try to address when developing your shooting stance. In a word, be comfortable. From there, here are a few pointers.

ARM POSITION: Arms should be fully extended when possible, but not necessarily locked out. Shoulders should be relaxed, not up around your ears.

BODY POSITION: Your torso should lean forward slightly with no more than a small amount of bending forward at the waist. NEVER bend backwards at waist, hip or shoulder area. Shoulders should always be forward of the hips.

BALANCE: Your weight needs to have a forward bias to counteract the kick of the gun. The idea is to get in a position that allows you to be active against the rearward force of the gun firing (recoil). This will enable you to control the gun properly and quickly return it from muzzle rise and recoil to the position back on target. The gun should never push you back so much that you become off-balance. If this happens, you need to move your balance and body position forward.

GRIP: Hold the gun tightly – tighter than you might think, but not to the point that you have feel like a vise. Grip is a common problem with new shooters., and you need to work to find that balance.

By definition, a sight is a device used to assist aligning or the aiming of firearms, and is typically composed of two components, front and rear aiming pieces that have to be lined up. The sights indicate where the gun is pointed, and are used to aim the gun.

Sights come in several sizes, shapes and colors; Some are all black, others have fiber optic tubes, painted dots or even inserts that glow in the dark. Most shooters quickly begin to favor one type of sight over another and their gun choice may actually be determined based on the sights.

Properly aligning the sights on the target gives you the orientation or exact location / position the gun will shoot the bullet when fired. Many shooters refer to this a the “sight picture”. The trick is to create the perfect sight picture.

Once you have aligned the sights with each other, place the sights on the target where you want the impact of the bullet to go. You are now ready to shoot!

See our listing on Google and see my Page and Reviews on Facebook.